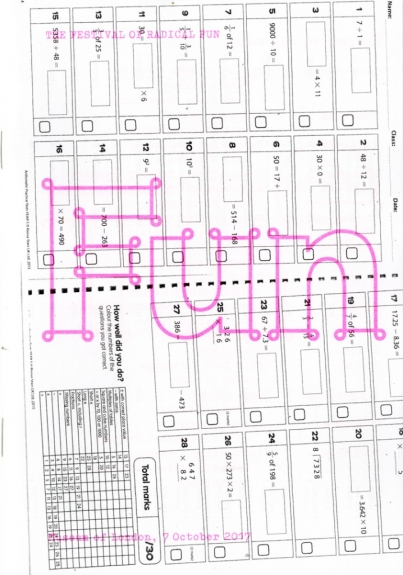 The Festival of Radical Fun
2017

'Do! Act! Share! Get together! Spend no money now! And, by doing so, you just might find yourself creating a London that’s radical and fun: the kind of London you always wanted to live in (you just never knew to ask).'

The Festival of Radical Fun was a citizen-led takeover of the Museum of London, on Saturday 7th October 2017. For 12 hours, the museum was full of artists, designers, performers and writers, who each invited visitors to make, play and do - and, through doing so, gave people the radical, DIY tools to change the city for ourselves.

I was commissioned to edit and produce the programme for the festival,
commissioning contributions from participants, conducting interviews with key artists (Kathrin Böhm of Company Drinks and Simran Randhawa of gal-dem) and writing an introductory essay. In an attempt to make the programme itself as radical as possible, I resolved to print it only on used A4 paper. I thus had to collect 15000 sheets of scrap paper from the recycling bins of friends, libraries and offices across London over a period of one month. Thanks to all who kindly donated.

The programme was designed and printed by Europa. The festival was curated by Lauren Parker and Oliver Whitehead. You can see a PDF here.