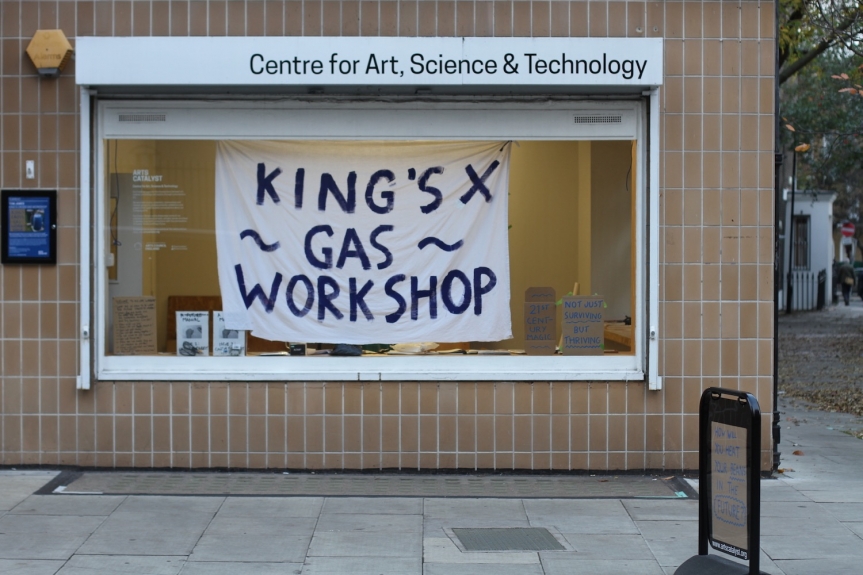 What will the people of King’s Cross do once the future starts to unravel? How will they live once the sea levels rise, the economy collapses and Russia turns off the gas? Where will they work? How will they heat their beans?

During November 2018, I was in residence at Arts Catalyst, in King’s Cross, London, building an anaerobic digester in the gallery and turning the centre into a temporary, low-tech, off-grid gas works. I ran a public workshop to teach people to build their own, and was available throughout to introduce people to the digester, explain the technology, and talk through people’s fears of the future.

Anaerobic digesters are simple machines designed to turn food waste into methane gas, which can then be used to cook or heat water. They can be made from everyday materials found in DIY shops, salvaged from skips outside houses, or reclaimed from landfill. Crucially, they also work better at scale – running one with your street or community works better than doing it alone – which is a nice rejoinder to much of the macho survivalism that’s doing the rounds right now.

The residency aimed to explore narratives of a past, present and future King’s Cross, encompassing on one hand its industrial history as a site of gas production, marked by its iconic gas holders (now luxury flats), and on the other, a possible future for collective, bottom-up energy production, in the context of the environmental and economic collapse that seems to be just round the corner.